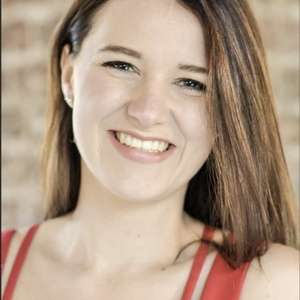 My teaching is centred around the Estill Model (training by Stephanie Marko EMCI-TP). This method focuses on the physiology of the voice and prioritises natural modes of sound production - such as speech quality and ‘play’ sounds - to produce powerful, clear, versatile and healthy singing.

Lessons delve into effective techniques used by pop, jazz, musical theatre and classical singers, such as speech-quality, sob, twang and belt. I believe in delivering engaging and informative lessons that not only focus on technique, but also encourage confidence, joy, passion and story-telling through performance!

The internationally-acclaimed singer, arranger, music director, and educator, Sara Leanne, has quickly become a major contributor and innovator to the vocal and a cappella industry around the world. Her career has led her to work with companies such as Universal Music Group, BBC, Decca Records and VOCES8, and to perform at venues including Beacon Theatre (Broadway, NYC), The Other Palace (West End, London) and Bahrain International Youth Festival (Manama, Bahrain).

Sara studied Music at King's College London and graduated in 2018 (First Class). During her studies, Sara led the university a cappella group, The Rolling Tones, to international recognition and prominence unique within the group’s history. The group soon became the first all-female group to win the Voice Festival UK (2017) and the first all-female UK representatives at the International Championships of Collegiate A Cappella Finals in New York City (2018).

As a professional vocal arranger, Sara has experience working with a variety of ensembles across Europe and the USA. She has won numerous ‘Best Arrangement’ awards at both the Contemporary A Cappella Record Awards (CARA) and the International Championship of Collegiate A Cappella (ICCA), perhaps most notably for her innovative reworking of Eivør’s "Trøllabundin” in 2018.

Sara has a vast amount of experience teaching the voice in a variety of settings, including 1:1 (online & in-person), small groups (a cappella groups, professional vocal ensembles), and large choirs (community choirs, amateur ensembles).

Sara regularly draws on a wealth of musical education in her work, always excited by the technical possibilities of the voice and the thrill of bringing fresh ideas from other genres into contemporary vocal music.